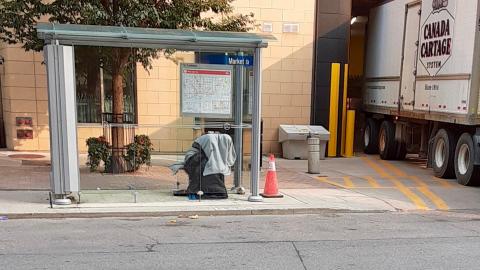 ….It’s been a month now since Michael (Paul) Kent passed away in the bus shelter situated just under my 3rd floor bedroom window.
I first noticed Paul back in early May but thought nothing much of it at the time as I’d seen many homeless people rest in bus shelters as they wandered the streets… little did I realize that he had actually started to live in it. This is the time we were starting to live with Covid being around..

By May 23 I Facebooked an article about the increase of the homeless in our area that included a photo of Michael….and several months later another article specifically about Michael and his condition after he was stabbed, which included more pictures and video of the area..many people reacted to the FB post some showing great concern…and rightly so…through the concern the police and other agencies visited several times to talk him into going with them for his safety but he kept on refusing….

It hurts me because I was his neighbour through all of this…I saw and heard day and night..and on top of that it all happened yards away from a shelter created for people in his situation….

After Michael passed his family were contacted and held a memorial at the shelter…I learnt his real name was Paul who grew up in North York but ended up in Vancouver before returning to Toronto. The local press wrote stories as to who’s to blame for his and other unnecessary homeless deaths.…there’s a lot of coulda, shoulda, woulda…going on right now.